Thank you for your patience while we retrieve your images.

The Corsair was a single-seat Navy Fighter and the last propeller-driven fighter made in the US.Unique in it's appearance, the Corsair had an inverted gull wing shape that was designed for Naval carrier operations but was flown from many Pacific theater airstrips by Marine Corps pilots and enjoyed a distinguished postwar combat career in Korea. The folding wing design was commonly used to create more space on the carrier for more aircraft.
The scene I have recreated here would be aboard the carrier, USS Saratoga off the coast of Iwo Jima during the assault by the US Marines in WWII. The Saratoga was under heavy attack by Japanese aircraft and suffered many casualties as well as serious damage. This replica of action shows a pilot bringing his Corsair back to the flight deck which along with his plane is heavily damaged by strafing and then bombed with the 500lb'er just entering the deck behind the aircraft. These bombs were often fitted with a delay fuse so as to cause the most damage by detonating below decks where ammunition and fuel was stored.
KBP copyright 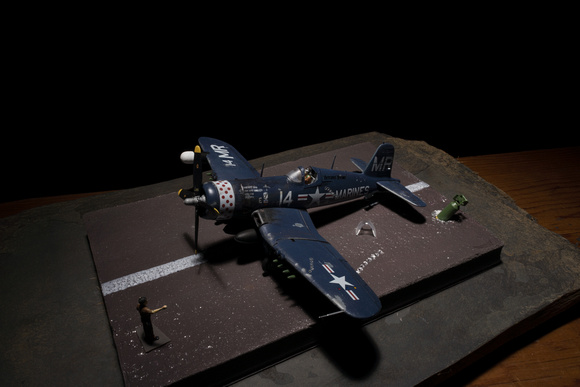